“A balanced mind is necessary to balance the mind of others.”

On Sunday, February 14th, Dr. Paul R. Fleischman will give a talk entitled “The Power of Small Changes: Establishing Daily Vipassana Practice,” a talk specifically for old students about the challenges and triumphs of meditating in daily life.  There will be a 1-hour group sitting from 2:00-3:00 PM EST, with a roughly 45-minute talk to follow.  The sitting and talk will take place virtually, via zoom, as part of the Virtual Group Sitting program.

Please direct any student questions about this event to [email protected]

If you are interested in attending, please use this link to register: https://us02web.zoom.us/webinar/register/WN_lUfrGXhYS6av0Y6f5-r2_g

Interview with a Long term server

Our mission of spreading the Dhamma relies on the generosity and volition of Dhamma servers. In addition to course, and in-between course servers, we welcome sit-serve and long-term servers. Long term servers provide a continuity and consistency that is important in the smooth functioning of the Center.

“Long-term service kept me inspired…and allowed me to develop a more casual relationship with more experienced meditators, which can be immensely rewarding in unexpected ways..”

Curious about long-term service and its benefits? We spoke with long term server, Jason Zimmerman, who has supported Dhamma Pubbananda and its evolving procedures throughout the COVID-19 outbreak and therefore has some unique insights into this type of service.

What attracted you to long-term service?

I started serving regular courses and when the time opened up in my life for longer term service, I did it because it tremendously strengthened my practice. It kept me inspired, moving, talking with like-minded individuals and you get a different level of access to more experienced meditators and are able to develop more casual relationships with those experienced individuals. This can be immensely rewarding in unexpected ways. In summary, I did it for community, friendship, and to strengthen my practice.

What have you gotten from your long-term service?

In addition to what we just discussed; the structure helped me establish a regular, daily practice which was difficult to maintain prior to long-term service. I knew if I immersed myself in a center, I’d be more likely to maintain my daily practice on the other side.

What would you tell someone who is apprehensive about long-term service?

During the interview, I was struck by Jason’s thoughts regarding this difference between long-term and shorter-term service. The idea that long-term service really allows a student to strengthen their practice in the householder tradition, because it requires the server to take seriously their responsibilities to themselves and the outside world, while also dedicating to the path.

If you are interested in long-term service or sit-serve opportunities with Dhamma Pubbananda, please contact [email protected]pubbananda.dhamma.org.

Sign up to be notified of service opportunities by sending a blank email to:
[email protected]pubbananda.dhamma.org 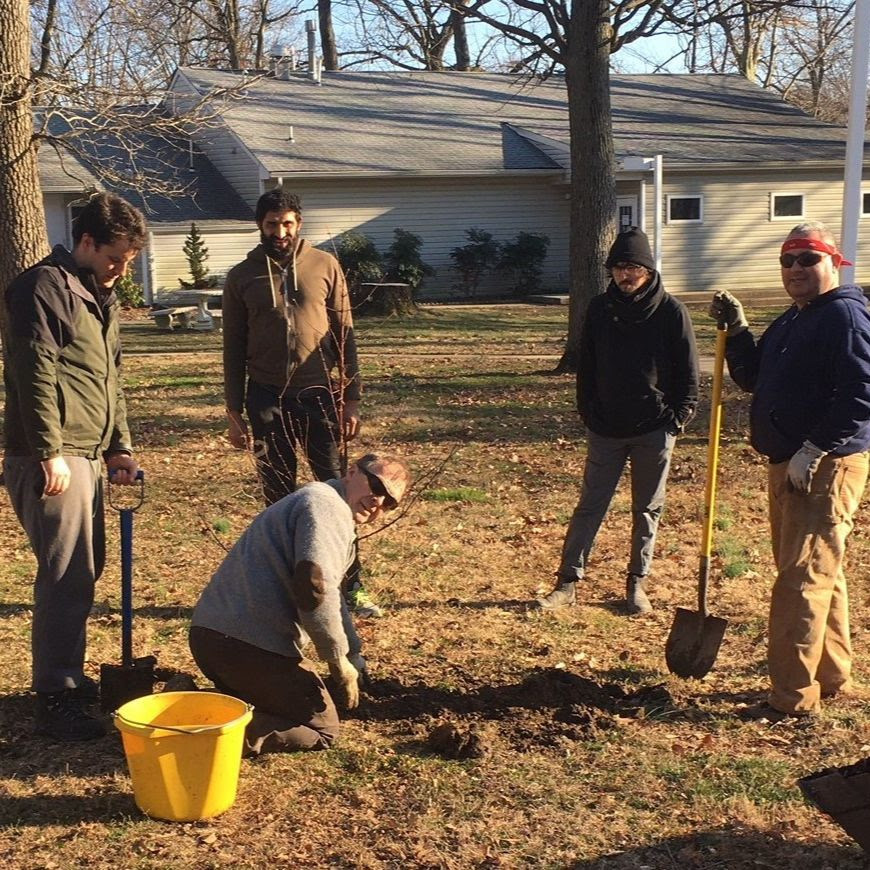 Building 3 was completed in time to hold our first 20 day course at the center in early December. The first couple days of the course were challenging, as a condensate pump problem caused the heat to go off, a clogged sewer pipe had water backing up into all the showers on the women’s side of the building, and an improperly timed backflush cycle on the water filter had the water flow going to nothing while students were trying to shower. Despite these issues the course went off successfully. The building has been used without incident ever since. We’ve now held three 10-day courses and one 3-day course in the building. Students seem to really appreciate the private rooms, private baths, and cells. The cost for this project was $1.125 M, all generously provided by old students. Now we can move our focus to the renovation of building 4 so that we have the same private accommodations for all students. 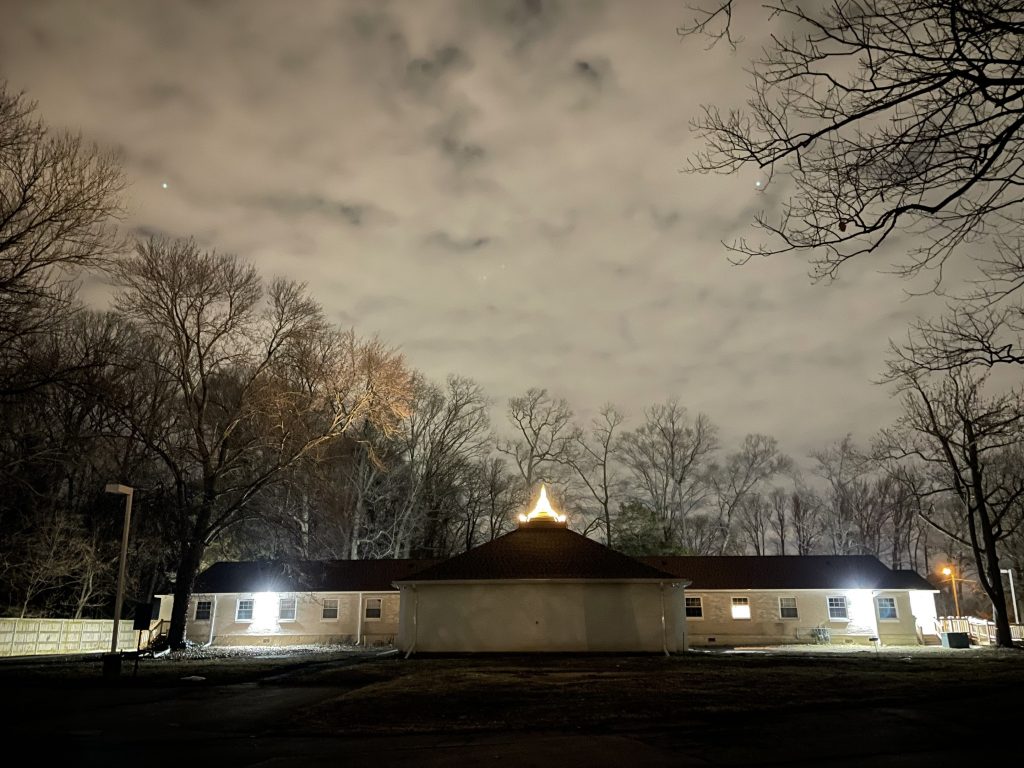 We’ve been very fortunate to be able to continue offering courses through most of the COVID pandemic. For 2021, we have a full schedule of courses planned and underway, albeit for a limited number of students. Our approach is to ensure, as much as possible, that everyone arrives at the center healthy and then, just in case, to follow best practices for limiting the spread of COVID. To ensure everyone arrives healthy, we 1) screen everyone by phone using a series of questions to understand their potential exposure, 2) require a negative pcr-type COVID test within a week prior to their arrival, and 3) limit admission to those who are within one days travel to the center by private car. Admission to courses is limited to 16 students and 4 servers so that we can provide private living facilities to everyone and maintain at least 6 ft spacing between everyone in the dining rooms and dhamma hall. While students are at the center, they are required to: 1) wear a mask at all times, except when in their private room, eating, or meditating in a cell, 2) wash their hands frequently, 3) wear gloves when handling common items in the dining rooms, and 4) maintain 6 ft spacing when encountering other students. In the event that anyone gets sick while on a course we are strictly enforcing our policy that they must leave and get a COVID test for the protection of everyone who was at the center. As you can imagine, this creates a more challenging environment for courses. Everyone seem to be adjusting to make the best of the situation. The worst part, though, is not being able to see the smile on their faces at the end.

Our financial situation has improved, we are no longer in deficit but we are still about $10K below the pre-Covid average monthly dana.

A Story of Angulimala

A malicious rumors drove a youth, named Angulimala, to live as an outlaw in the jungle. In a deranged state of mind, he vowed to kill a thousand human beings. To keep track of the number of his victims, he took a finger from each and added it to a string around his neck. This is how he became known as Angulimala, or “Finger-Garland.”

Angulimala became the terror of the countryside. Everyone was afraid. The king heard about him and decided to capture him.

When his mother heard this news, she went to the forest to save her son. By this time, Angulimala needed only one more finger to fulfill his vow.

Now, the Buddha was staying nearby. He learned that Angulimala’s mother was going to try to find him and save him. But there was a danger that the son would end up killing the mother. To prevent that, the Buddha himself went to the forest to find the young man.

Angulimala had not slept for days and was close to exhaustion. At the same time, he was very anxious to kill the thousandth person and complete his task. He made up his mind to kill the first person he met. Perched high on a mountain, hidden by trees, he saw a woman on the path below. He descended but then he saw it was his mother.

At that moment, the Buddha appeared on the path. Angulimala decided to kill him instead.

He charged after the Buddha with a knife raised, but the Buddha kept moving ahead out of his reach. Angulimala could not catch up, no matter how much he tried.

The Buddha replied, “I have stopped. It is you who have not stopped.”

Angulimala didn’t understand. He asked, “Why do you say that you have stopped while I have not?”

The Buddha replied, “I say that I have stopped because I have given up killing all beings. I have given up ill-treating or harming all living beings. I have cultivated love and patience through meditation. But you—you have not given up killing or ill-treating others, and you have not cultivated love and patience. Therefore, you are the one who has not stopped.”

These words penetrated the fog of Angulimala’s mind and calmed his rage. He thought, “This man is wise and brave. He must be the Buddha himself. He must have come here just to help me!”

Angulimala threw away his weapons and asked the Buddha to teach him meditation and wisdom. The Buddha agreed.

When the king and his men came for Angulimala, they found him in the Buddha’s forest meditation retreat. Since the outlaw had given up his evil ways, the king agreed to leave him alone. Angulimala sincerely and seriously practiced meditation and the training of moral conduct.

Still, he had no peace of mind. He kept remembering what he had done in the past. He recalled the pathetic cries of his victims.

Whenever he went out in public, people recognized him and attacked him, leaving him bleeding and bruised. He felt guilty and thought that he was too horrible a person to ever be happy and peaceful, no matter how hard he tried.

The Buddha reminded him, “My son, you have stopped doing evil but are still suffering the consequences of your past actions. Have patience. Everyone can change for the better, no matter what they have done. No one is too bad to change, and you have changed. It doesn’t matter whether people realize it or not. Keep practicing your meditation patiently.”

One morning while he was in the streets near the meditation retreat, Angulimala heard someone crying in pain. It was a woman suffering the agonies of childbirth.

He stopped and thought to himself, “All human beings suffer.” He began to have deep compassion for the woman and all the people he had harmed, as well as for himself and all living beings.

Angulimala lived peacefully after that. When people heard about the change in him, they asked the Buddha, “Can it be true? Can a man who has killed so many people ever really learn to concentrate and calm his mind? Can he really have a peaceful and balanced mind? Is it possible for him to live a good life after all he has done?”

The Buddha answered, “Yes. He harmed so many people because his mind was overwhelmed with hurt and anger. He had been badly harmed himself. Later, he listened to good advice, he meditated, and his mind became strong and healthy.”

No matter what someone may have done in the past, developing concentration can help. It is a powerful tool for gaining real peace of mind, and cultivating kindness and compassion for others.